I’ve talked about flint knapping a little in my books and I figured it’d be good to let people know what that really is.  At its most basic, the skill or art of flint knapping is the shaping of stone to make blades, points, and other implements.  When you think about the classic, often inaccurate image of Native American combat, you think of bows and stone-tipped arrows, spears and tomahawks.  Those stone projectile points, weapon blades, and tools such as drills, grinders, scrapers, needles, fishing hooks, harpoons, and dozens of others were all possible with skilled flint knapping.

However, from the time the first European settlers set foot in North America, the art of flint knapping was on borrowed time.  And, for a while, it nearly disappeared completely from the cultural lexicon of America.

One thing Native Americans were incredibly adept at was appropriating military technology and incorporating it into their existing tactical structure.  And they started incorporating scrap metal from European cultures early on, fashioning arrowheads out of discarded iron nails and tomahawk blades from discarded farm implements.  The plains tribes effectively incorporated modern firearms to devastating effect, and even the eastern tribes used muskets in major engagements as early as the French and Indian War.

Still, there are thousands upon thousands of these field finds in different regions all over the US.  This itself is a testament to the necessity of this skill for survival in a naturalist state.  The cultures that could shape stone most to their purpose and their need were able not only to survive, but to thrive.  Some of the most complex artifacts of flint knapping ever seen have come from the Ancient Mayans.  Their skill at working Obsidian into fantastical shapes and styles is unbelievable, and a bit disturbing once you look into what those tools were used to accomplish.

The fact is, most of the stone projectile points, blades, and implements that are found on the tops of freshly plowed fields are far older than people would think.  The age of these “field finds” as they’re called are often measured more in eons than in centuries, with some specimens more than ten thousand years old.  Primitive proto-technology goes farther back even than that.  These were simpler societies in some ways, but the people themselves were far from simple.  Anyone who has attempted to recreate even one of the hundreds of styles of points can testify to the truth of that.  The engineering and design of the implements is impressive and complex. 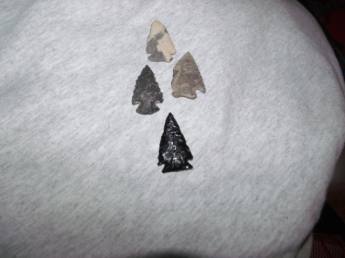 Like any skill set, though, once you understand the fundamentals it becomes a question of repetition and aptitude.  I’ve been studying the fundamentals for about four years now, maybe a little more.  It’s not an easy skill to acquire, but I’ve managed to learn some things and become proficient enough in certain techniques of flaking to make my results decently consistent.  I learned something important about flint knapping yesterday, though.  Even for people who have a decent amount of experience, it can be dangerous.

I was trying a new technique, and pressed too hard on the tool, and the piece slipped.  My hand, with all of my weight behind it slammed into the fresh, very sharp end of the pre-form and it sliced open the first joint of my right index finger.  The cut was so deep that for a moment nothing happened, and I stared in shock at the meaty inside of my finger.

Then, it started bleeding.

Then, I noticed the shard of glass sticking out of my left palm.

It seemed everything happened at once, and I had no time to think, just to react.  I pinched the cut closed with my left hand, shocked at how much blood had come out.  I checked the cut carefully, got woozy and wished I hadn’t, and pinched it tight again.  For a brief instant, I’d seen the inside of my finger, and was reminded oddly of raw hamburger.

This time, when I pinched the wound closed, I wrapped it as tightly as I could with a clean rag that I always keep with me while knapping stone or glass. I twisted the rag as I wrapped, keeping it tight enough to be painful.  At the end, I pinched it together with my thumb and hoped that would stop the bleeding, or at least slow it down.

Almost as an afterthought I picked the shard of glass out of my left palm, checked to make sure the tip hadn’t broken off, and tossed it into the pile on my tarp.

I had dropped all of my tools and the pre-form I’d been working on, and I left them where they fell.  I grabbed my cell phone, did a rough brush off to get the small flakes off, and then headed inside.  My mind was racing, and so was my pulse.  All I could think about was getting gauze pads and tape in case it bled through the rag and I needed to try something else to control the bleeding.

I carefully and nervously dialed my wife.

To make a long and uncomfortable story short, we ended up at an Urgent Care facility with my hand still wrapped tightly in that rag, throbbing slightly with every heartbeat.  I went in and was quickly taken back to see a PA.  When she examined the cut, though, there was some light swelling, but the bleeding had stopped completely.  The wound had sealed shut from the pressure, the sides of the cut so smooth and even that you couldn’t even see them.  All that I could see was a line of red deep in the meat that I guess  was the inside termination of the cut.  A little blood seeped slowly out of each end of the cut, but not even enough to run down my finger.  I couldn’t believe it, and neither could the PA.  After a few moments, she found the edge of the cut, but it was sealed tight.

My finger the next morning.  It was a long night.

I’ve cut myself before while working a piece, so this wasn’t anything terribly new.  I know I’ve never had a cut that deep before, though.  To be honest, it scared me a little to see that far into my finger.  I was worried I might have damaged tendons or veins or something.  It’s not often that you actually hear the blood start to flow in a cut, but that’s what had happened.  To see it now sealed tight enough for me to flex against it just didn’t make sense.

The only explanation that we could come up with was that the edge of the too was so sharp where I hit it that it had sliced my skin similar to the way a surgeon’s scalpel does.  My hand struck at an offset angle as well, and that helped some.  But most of all, it was the intense pressure I’d applied to the cut immediately after it happened.

As I said before, this isn’t the first time I’ve cut myself while flint knapping, and odds are it won’t be the last.  Hopefully this will be the worst of it, though, because an inescapable fact of the art is that the better one becomes, the sharper the resulting tools, blades, and points.  So small mistakes can have pretty big consequences.  The small shard that went into my left palm gave me shivers when I looked at it closer.  If that had happened a few inches down my wrist and with a larger shard, it could have been very bad.

Flint knapping is a skill, and an art, but it is not without its dangers.  This would have been even more true in the neo and paleo lithic periods when stone tools and implements were the only tools available to mankind.  A cut like mine is painful and inconvenient today, but not typically a real threat to someone’s overall health or life.  Barring an odd infection that is made far less likely with antibiotic soaps, ointments, and sterile bandaging, this cut will heal in a week or two, even without stitches.  It may actually heal faster since the cut was so even and clean and there was little ragged tissue damage to repair.

In ancient times, though, a cut as deep as this would have been a dangerous proposition at best.  With care, it could have been survived, but only by a strong and healthy individual.  Infection sets in quickly in outdoor environments like that of early stone age man.  Even a simple finger laceration could serve as a death sentence from a systemic bacterial infection or gangrene.  The same would be true in an all-out survival scenario such as the one  I describe in my Blackout Series.  Without basic medical treatment like bandaging and antiseptic, a cut like mine could quickly turn life threatening.

The final painful lesson this experience taught me is just how lethal these stone blades and points were when they were in use.  When we hold these field finds, they are weathered and softened with the passage of centuries in the dirt and the elements.  But when they were made, they were far from dull.  Obsidian points more than a thousand years old have been found in protected cave environments with edges still sharper than a surgeon’s scalpel.  The modern glass I was using to practice has very similar fracture characteristics as obsidian and can create edges nearly as sharp and as lethal.

As useful and as necessary as the skill of flint knapping is, the dangers and pitfalls cannot be overlooked.  Even after years of practice, it can still be a painfully dangerous art. 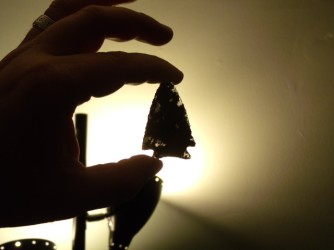 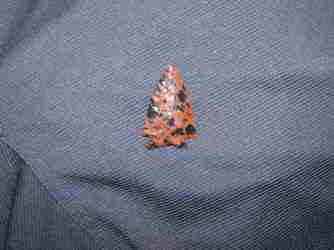