It’s hard to describe the sense of shock.  Suddenly you don’t recognize street signs and you can’t read billboards.  The pictures are there, sure, and you can even put together meaning every now and then based solely on the images.  But not often.  Usually you just ride around in a weird fog of incomprehension that won’t go away.

And when people speak to you, it’s no better.

The words come out in a jumble of sounds that just don’t make any sense.  You can tell they should.  The other person who said them knows exactly what they mean and what your response should be.  They wait, expectantly, but you can’t form the sounds to reply.  You make your own, but you immediately see in the other person’s eyes that your sounds don’t make sense to them any more than theirs make sense to you.  I wonder if this is what a two year old child feels like as they try to talk effectively with an adult.  There’s a helpless, confused sense of trying to bridge a language barrier that you just can’t get around.  You know what you’re trying to say, but no one around you does.

It was an uncomfortable feeling driving through San Salvador.  I had only a vague idea what some stores sold, but not many.  There were a few familiar icons like the McDonald’s and Wendy’s signs, but they were brief flashes in an otherwise solid wall of incomprehension.  Disorientation quickly gave way to a feeling of gut-deep fear that never really went away.

I don’t think I’ve ever been in a real language barrier situation before, but there I was.  The only people I could communicate with were the people that had come on the mission trip with me and the translators.  It’s a little frightening to be that cut off from the world around you.  There’s a feeling of isolation, a feeling of other-ness that sets in and it’s difficult to shake.  The translators provided by Habitat were our lifelines to the rest of the world.

Culture shock is a word that takes on a whole new meaning when you experience it firsthand.  The sights were different, the sounds, even the smell of the air was something foreign.  There was an ever present overtone of acrid wood smoke in the air, even in the city.  Cars and trucks thirty years old belched clouds of black oil smoke on the freeway right next to modern, fuel efficient Japanese imports.  Traffic laws seemed effectively non-existent and people moved through the lanes in an aggressive melee of motor vehicles.  More than once I found myself pressing an imaginary brake pedal from my seat two thirds of the way back on the bus.  It was a reflex reaction that stuck with me the whole week.

We climbed a mountain road out of the city, and the traffic thankfully thinned.  The bus driver pulled over at a mountainside restaurant so some of us could use the restroom.  Guards stationed at the entrance waived us in with smiles and hands 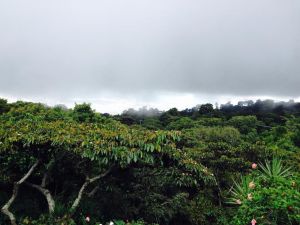 This was a clear view of San Salvador from the mountains… then a cloud bank rolled in. It was the coolest I would be for the rest of the week.

resting on their weapons.  One held a shotgun and the other and AR-style rifle.  They smiled and nodded as we passed, but their eyes never left the road for long.

There were guards like that just about everywhere you turned.  Even the gas stations had uniformed guards with weapons patrolling the pumps and watching the store entries.  Several trucks with police officers drove by the turn off, their weapons in their hands at all times, eyes scanning the road.  At one point, an open bed truck drove by with men in camouflage uniforms and black face masks.  Each of those men held an AR-style rifle at the ready, their hard eyes were the only things visible of their face.  One locked his eyes on me as the rounded a bend, and there was a hardness there like nothing I’ve ever seen before.  I don’t know if the men were military, police, or what, but they were dangerous.

The truck rounded the bend, and the men were gone.  I never saw any of those uniforms again, but once was enough.  There were plenty of regular police on the roads and in the city of Ahuachapán when we arrived.  They rode in cars, trucks, and on the backs of motorcycles on every street.  There didn’t seem to be a city block that didn’t have at least a pair of the officers standing on a corner or just inside some shop’s doorway.  They watched the traffic and the people passing by constantly with eyes that never rested long in one place.

I guess I was both comforted and concerned at their presence.  I felt that same strange dichotomy every time I saw one of the police officers with their ubiquitous shotguns and compact rifles.   Seeing police officers in Charlotte is one thing.  They drive by in their shiny, clean cruisers, and there’s a comfortable sense of detachment there.  I know they’re armed and trained to use deadly force if needed, but I can be relatively at ease in the knowledge that they aren’t really expecting a sudden gun battle to break out on the corner of Westinghouse and South Tryon. It became clear very early on that every single police officer in El Salvador absolutely expected, at any instant, to become engaged in a fight for their lives and the lives of the citizens around them.  And given the unbelievable level of gang violence, the police and private security personnel had plenty of reason to worry.

As we wound our way down the road and out of the mountains and onto the flat plains of the interior of the country we left the crazed chaos of the city behind.  We drove through lowlands and volcanic plains that were heavily planted in corn (maize).  Cows and horses grazed in open pastures that more often than not had no fences.  We passed more than one horse and cow that was tethered to a guard rail or a light pole next to the road, happily munching on the short grass growing on the edge of the ditch.

People seemed to be everywhere.  There were shaky lean-to stalls along the highway at regular intervals selling anything from coconuts and plantains to hand woven hammocks to bundles of dried firewood sticks.  At nearly every crossroads people waited with clear plastic bags of cashews, pistachios, and almonds.  Roadside villages had walls too high to see over, for the most part, and some were complete with heavy metal gates that could be closed.  Even the isolated houses that we passed, whether block and mortar or the more prevalent corrugated sheet metal and timber construction, were tiny fortified enclaves themselves.  Every village had a wall, every house had a fence.  Old, rusted barbed wire and newer stainless steel razor wire were everywhere.  Some of the concrete and mortar walls even had jagged broken glass set into the top.

View up the street from our hotel

Traffic, detours, and the occasional random police checkpoint on the highway turned what should have been a two and a half hour drive into a trek of more than four hours from San Salvador to Ahuachapán.   On the road into Ahuachapán we passed turnoffs that led to other small villages and communities including the village we’d spend the rest of the week laboring in, Getsemini.  As we entered the town itself, traffic immediately increased and we were once again in the middle of a maelstrom of honking horns, squealing brakes, and exhaust fumes.  Any time the bus slowed to a walking pace or stopped, people seized the opportunity to try and sell whatever they had to offer, walking past the windows and calling words we didn’t understand along with prices that seemed pulled straight out of my parents’ childhood memories.  A bag limes for a quarter.  Papusas (a tortilla style patty stuffed with meat, cheese, veggies, or all of the above and fried) a nickel a piece.  Frozen ice cream pops for fifty cent.

Motor bikes weave in and out of the traffic stream, dodging dump trucks, busses, and thirty year old sedans.  People pepper the sidewalks on most streets, but there are a few near the town center that are truly packed.  The bus turned left and passed a playground with effectively all of the structures made of steel and the ground smooth gray concrete.  All I could see at first were the skinned knees and scraped elbows that such a place would necessarily spawn.

Then again, the playground at my elementary school didn’t really look much different.  It was all metal angles and flat concrete basketball goals.  The only thing rubber on the whole playground were the seats of the swings.  And we had our fair share of scraped knees and what not, but very few real injuries.  Most of the time if someone got really seriously hurt, they were doing something risky and deserved it, myself included.

The bus parked at the Casa Blanca hotel, and I couldn’t help but chuckle.  It was an apt name, though, because with the wicker chairs, slatted windows, and dark stained hardwoods the interior could have easily been the backdrop for a good Humphrey 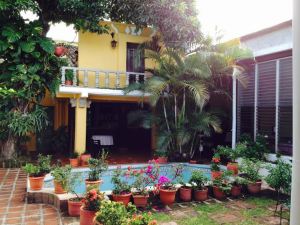 Courtyard at the Casa Blanca

Bogart movie.  The rooms were well decorated and clean with air conditioners that actually kept the stifling heat at bay.  The courtyard was gorgeous and served as a fitting view from the bar.

The staff that greeted us was warm and friendly with broad smiles and handshakes for those of us who were new and warm hugs for returning friends.  Our mission group has stayed at that hotel several times over the years and formed close relationships to those who operate it.  At the beginning of the week I felt somewhat like an outsider, but by the end of the week I found myself choking up as we left.  It felt as if I was leaving behind good friends and confidantes.  The staff at the hotel served as a microcosm of what we would find throughout the city and the village where we worked the entire week.

The sun had set on my first official day in another country.