Officer of the Watch is up for sale on Amazon’s Kindle platform at: http://amzn.com/B00TYYW7M2 for $0.99 or FEE to Kindle Unlimited subscribers.

This is the first installment of the Blackout Series.  Officer of the Watch takes the reader through the four days immediately following a massive surprise EMP attack on the United States.  Four nuclear warheads are launched from waters near the 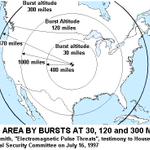 coast of the US, and they are detonated at an elevation of 250mi above the surface.  The resulting electromagnetic pulses crash the power grid and bring American society immediately to its knees.

Joe, an ex-Navy Seal leads a group of co-workers and their families out of a city that is suddenly in the grips of a strange and shadowy military force.  Meanwhile, Eric and his fiancé Christina are stranded on Crowder’s Mountain near Charlotte, NC.  They must find a way to make it to safety against overwhelming odds.

Officer of the Watch is ranked in the Top 10 Military Thrillers on Amazon’s Kindle Store, and it is ranked 4.5 out of 5 Stars by the readers themselves.  It is a story of courage, perseverance, and the power of faith in the face of seemingly impossible odds.